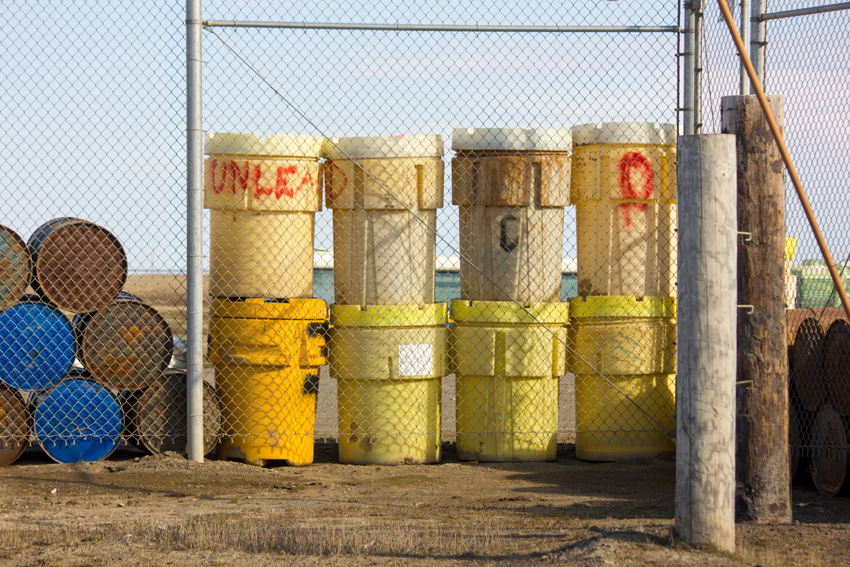 part of the Alaska 2017: Utqiaġvik album

"Wait, can we turn around for a second?"

Mom and I were exploring Utqiaġvik, stopping and checking things out along the way, so my request to double back was not unusual. I thought we had just past something that, while not unusual at industrial sites, was an object that I had only ever seen in the twenty-fourth century. Naturally, she asked why we were turning around. Not sure in the moment how to reply succinctly, I stalled on this question until I could confirm my suspicions.

As we pulled up and they came into view outside my open window, I chuckled to myself that it was in Utqiaġvik, at the top of the world of all places, where I would first run across industrial containers called overpack drums of the same type as those frequently seen in Star Trek: The Next Generation (1987–1994).

I took two photographs and then we continued exploring, while I explained why these containers — stacked in the yard of North Slope Borough's Sanitation Services Shop — were noteworthy. The yellow overpack drums, made of polyethylene and featuring a threaded lid, made their Starfleet debut in "Disaster", the fifth episode of The Next Generation's fifth season.

I am unable to establish what specific manufacturer's overpack drums appeared aboard the starship Enterprise, but several companies offer very similar products today. Of those present in Utqiaġvik, three appear to be of the same make, model and vintage as the props. Looking at the photograph atop this article and thinking of a spreadsheet, yellow drums A1, B2 and D2 match the subtle design features of those sourced for the show in 1991. 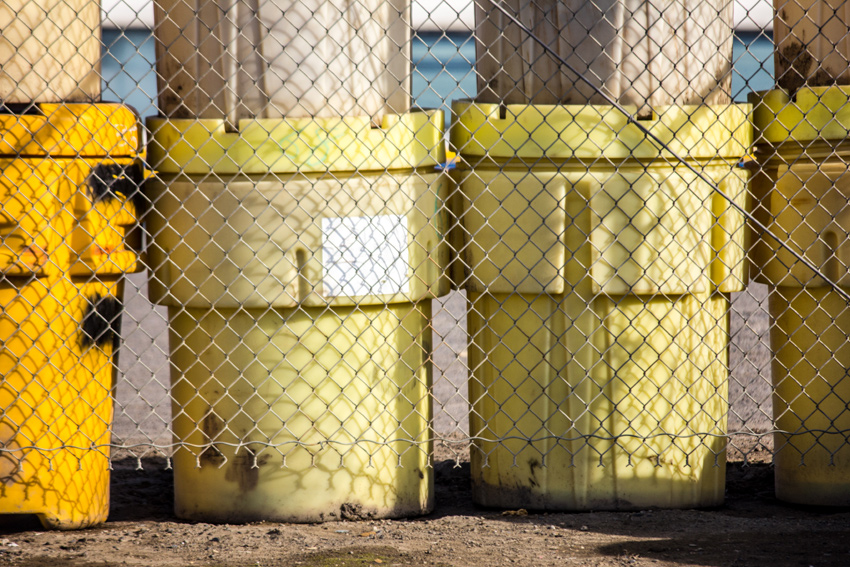 "Disaster" does a good job of showing off the then new props. In a cargo bay where Chief Engineer Lieutenant Commander Geordi La Forge (LeVar Burton) and Chief Medical Officer Doctor Beverly Crusher (Gates McFadden) are trapped, the containers and their volatile contents are a plot point. Not just set dressing for the cargo bay, the two actors also get physical with the overpack drums. 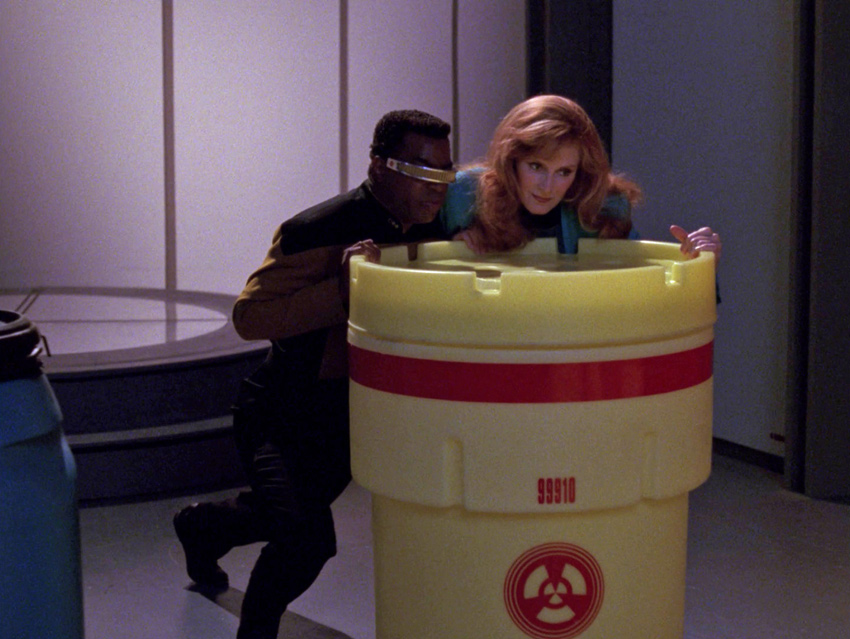 There are several shots of overpack drums clustered and stacked, one contemporary selling point of these containers. 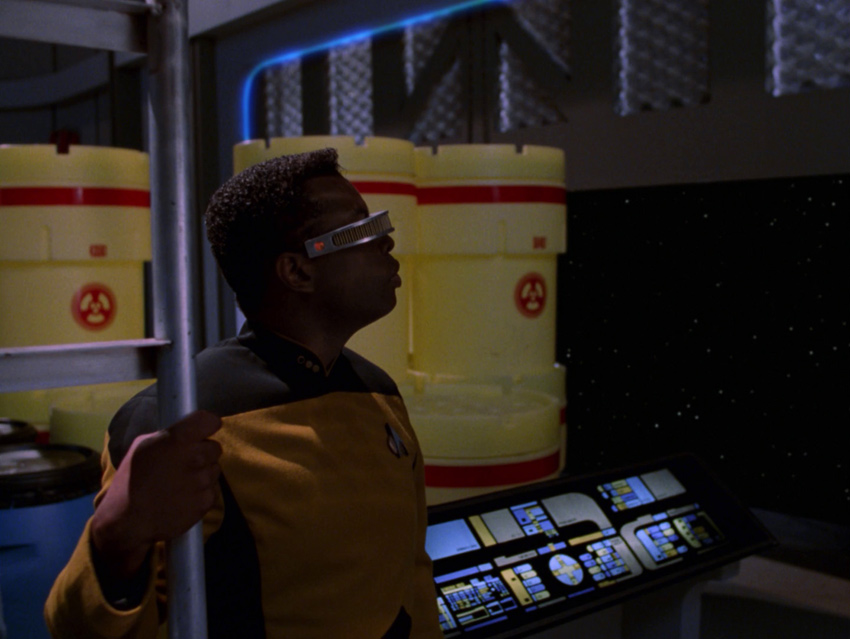 As a bonus, the episode also shows versions of the overpack drums (plus other blue cargo drums) in miniature as they are jettisoned into space. Two of those miniatures went home with writer Ronald D. Moore; they were later auctioned. 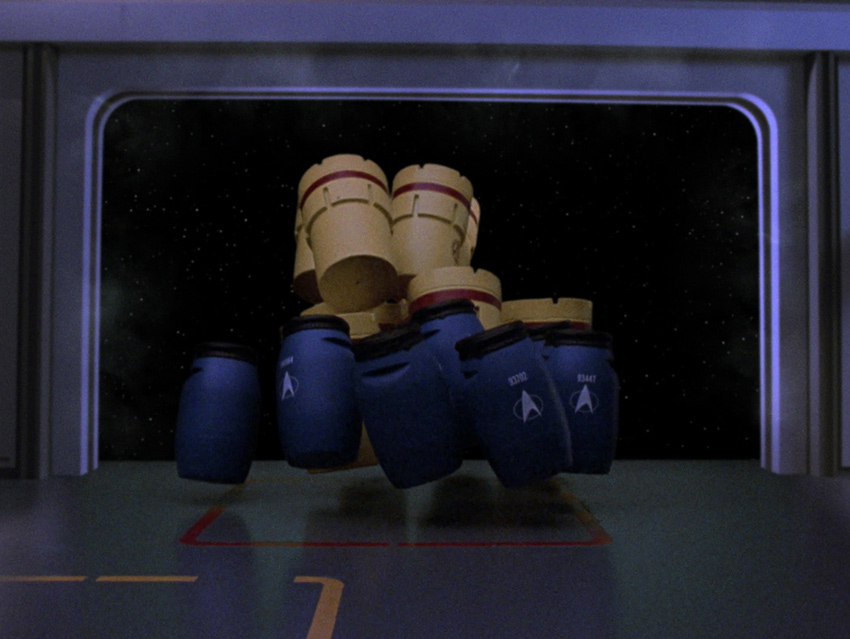 Yellow overpack drums with their red and white graphics continued to be used throughout the run of Star Trek: The Next Generation, often appearing in the background but sometimes featured more prominently. One good example of the latter is the sixth episode of the sixth season — "True Q" — when the containers are given blue and white graphics to depict their use as medical cargo. 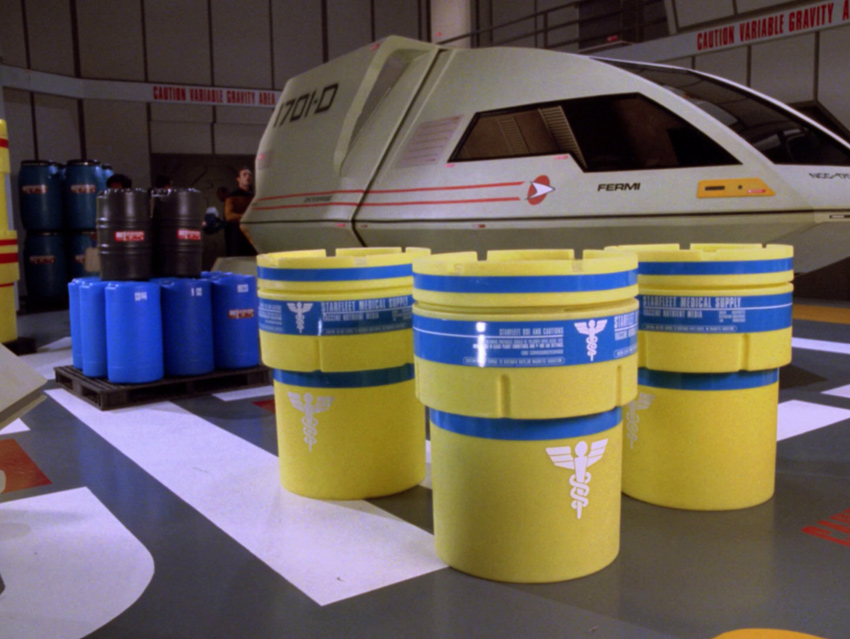 Following the end of the television show, the containers went on to reprise their roles, as it were, in the first motion picture featuring Picard and crew, Star Trek Generations (1994) seen at villain Tolian Soran's launcher on Veridian III and of course aboard Enterprise. The overpack drums were later repainted mostly black for use in Star Trek: Voyager (1995–2001) and Star Trek: Enterprise (2001–2005).

Okay, so maybe it is a little silly, but I find great enjoyment in appreciating the little things in life. Considering the dramatic flair of randomly encountering these overpack drums after twenty-five years, eight months and seven days in a place few people ever visit, it was obviously meant to be.

"The Containers Down In Cargo Bay Three" https://mtsutro.org?p=1221