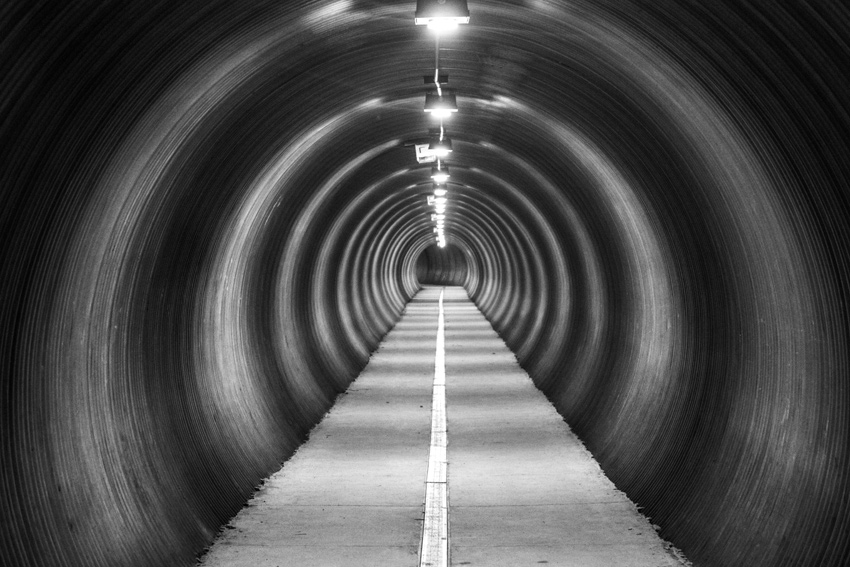 Facing south in the pedestrian tunnel (2000) built under Whittier Yard by the Alaska Railroad Corporation.

part of the Alaska 2017: Whittier album

A small community of about 250 residents, the City of Whittier (incorporated 1969) was originally built by the United States Army as Camp Sullivan, an important deepwater port supporting operations during World War II. The railroad was extended to Whittier on Friday, 23 April 1943 upon completion of the Anton Anderson Memorial Tunnel — 2.52 miles through Maynard Mountain and a journey I will later document — allowing Camp Sullivan to become "primary debarkation point for cargo, troops and dependents of the Alaska Command."

During the Whittier Access Project (1998–2000), the tunnel was upgraded to "transform the existing railroad tunnel into a one-lane, combination highway and railway tunnel that allows cars and trains to take turns traveling through." The Anton Anderson is likely what comes to mind when thinking about Whittier tunnels, but there is another, smaller-scale tunnel there that I also checked out during my visit.

Providing safe passage underneath the large Whittier Yard rail facility since June 2000, the Alaska Railroad Corporation pedestrian tunnel connects the northern waterfront area to the southern downtown area. Approximately 512 feet long, the pedestrian tunnel provides an alternative to walking to the Whittier Street grade crossing, which is blocked at times by trains, or dangerously crossing the expansive rail yard itself. As nearly all of Whittier's residents live in the Hodge Building (1957), now Begich Towers, the tunnel provides a safer and more direct route to the marina for those on foot.

Having learned about the pedestrian tunnel in our copy of The Milepost, I was eager to take a closer look as we explored the marina area. Each side of the tunnel is marked by a nice sign featuring a cool logo reminiscent of the tunnel's illuminated and ribbed interior. We approached from the northern side, passing the sign on a sidewalk that leads to an area covered by a metal roof. Once inside, the tunnel takes two sharp turns and then opens into a straight passageway underneath the railroad. 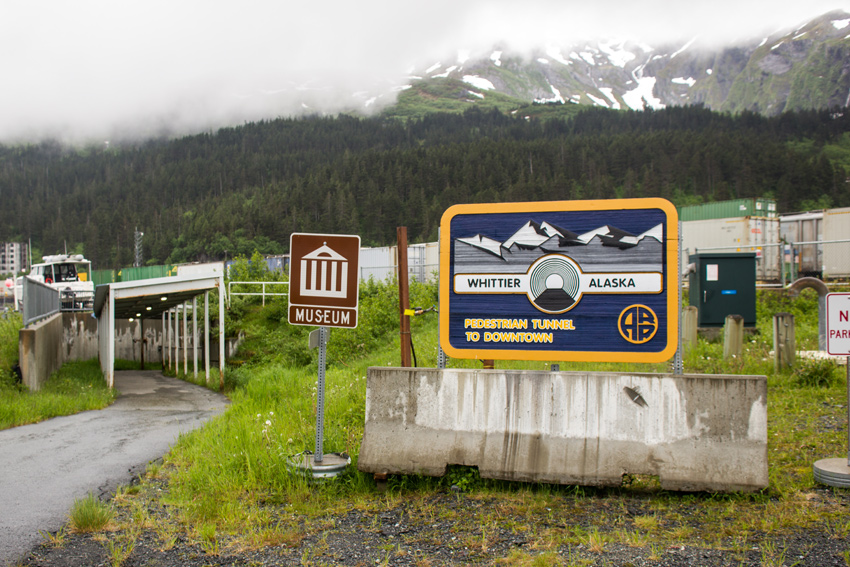 David July
"The Passageway Underneath The Railroad" https://mtsutro.org?p=1222