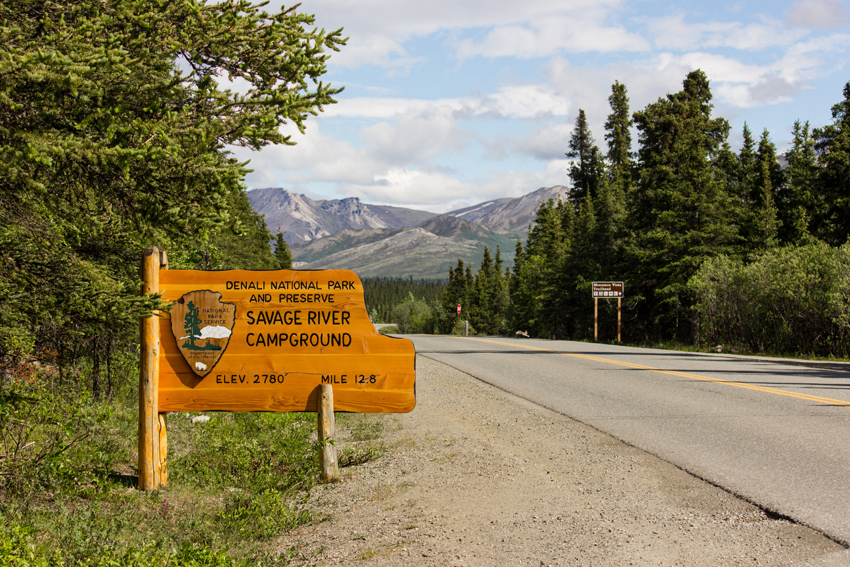 part of the Alaska 2017: Denali National Park and Preserve album

Back in February 2017, while assembling a daily travel guide for my Alaska adventure in June, I came across a nice photograph to represent our Savage River Campground reservation in Denali National Park and Preserve. Taken by Sue Thomas and appearing on her Yukon Sights website, the photograph shows the campground's wooden sign among the surrounding trees and mountains. It was an image I knew I wanted to capture myself once there.

Late in the afternoon on our third day in Denali, we returned to the campground in order to hike the adjacent Mountain Vista Trail. As we approached the entrance, I noticed that the weather had finally cleared up enough to make the photograph I wanted possible. We pulled over and I ran to the sign, quickly shooting three frames. I thought that there was some brief movement but seeing nothing around, I returned to the truck and we continued on to our site and then the trail.

The movement that I detected turned out to be a snowshoe hare (Lepus americanus) bolting across the road at the moment I took my pictures. The hare appears in the distance near a stop sign in the first two of three shots. Even though that third frame is slightly better, I developed the second instead. Considering my deliberate efforts to photograph wildlife, the good fortune of unintentionally capturing an animal is just too good to pass up.

I saw many snowshoe hares throughout Alaska, with the densest populations observed between Coldfoot and Wiseman along the Dalton Highway. Not coincidentally, this is the area where we spotted a Canada lynx (Lynx canadensis), whose diet primarily consists of snowshoe hare.