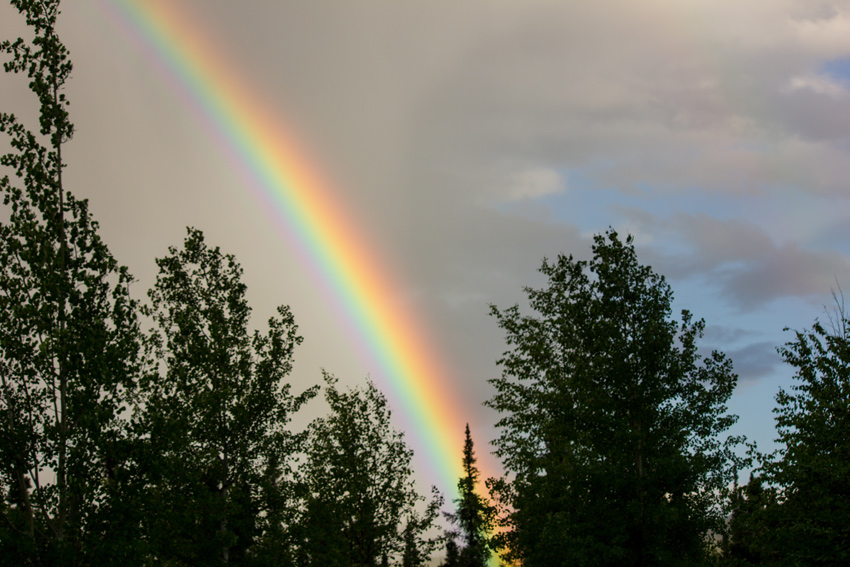 An extremely bright and vivid rainbow in the sky over Coldfoot seen from the parking lot of the Arctic Interagency Visitor Center (2004).

Although it is tempting to stop at each and every turnout along the way, travelling the James W. Dalton Highway (AK 11) with lodging reservations requires that certain daily deadlines be met. In the case of our rental at the Hicker family's Arctic Getaway in Wiseman, we were to check-in by 2100 hours or contact them otherwise. Of course, there is no way to contact anyone on the Dalton save for the emergency satellite telephone we were carrying.

Passing through Coldfoot at 2036 hours, we still had about thirty minutes of driving before we arrived at Arctic Getaway. It was close; my first photograph of the Hicker's home, built as a gold rush dance hall in 1910, was taken at 2105 hours. Uta Hicker, who assured us that our tardy arrival time was no matter, got us settled into the Aurora Cabin and let us know when to come over for breakfast the following morning. As for dinner and gasoline, we needed to head back down to Coldfoot. 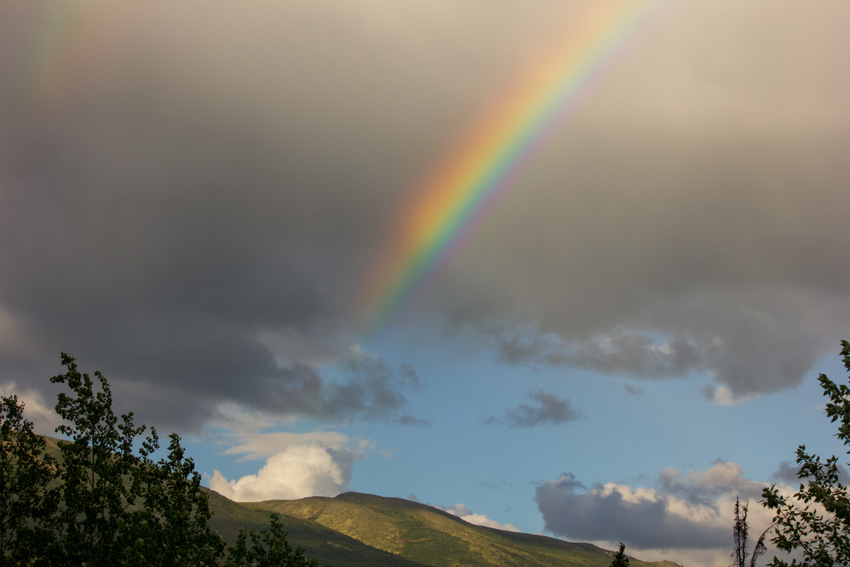 There was no doubt that we were hungry, but Mom pointed out that the Arctic Interagency Visitor Center closed at 2200 hours. Not knowing how much time we would have here on our way back down, it was best to visit now and not take any chances. Deciding to fuel up and eat at Coldfoot Camp afterward, we first went to the center so that we could explore its exhibits before they closed.

Opening with a commemoration ceremony on Tuesday, 29 June 2004, the Arctic Interagency Visitor Center is a facility of the Bureau of Land Management, National Park Service and U.S. Fish and Wildlife Service, who have worked "collaboratively in Coldfoot since 1989 to provide information to visitors traveling the Dalton Highway." The Arctic Interagency Visitor Center is "almost ten times the size of the previous [center] and offers a wide array of interpretative displays and exhibits." 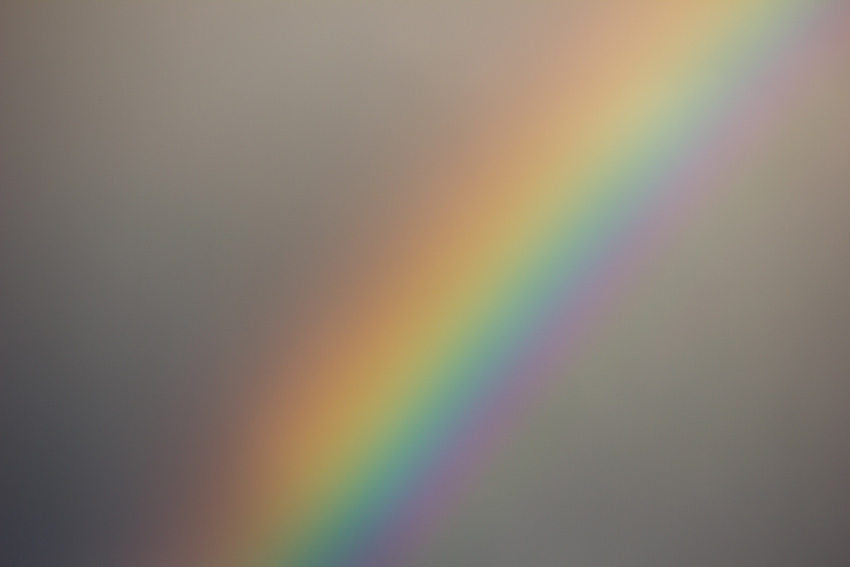 We spoke with the rangers on duty about our Dalton animal sightings and looked at some of the displays before we had to let them lock up. Walking outside at 2159 hours, I was immediately struck by the sight of a large, extremely bright and vivid rainbow stretching across the sky from north to south. Moving into the parking lot to photograph it, I remarked that this was the brightest rainbow that I have ever seen. Even the rangers were seemingly awed by the phenomenon.

I was frustrated while taking my photographs because I could only focus the images properly when at a wide focal length; each closeup was blurry despite my efforts. Processing these pictures now, I was disappointed how most failed to capture the awesome brilliance of the spectacle as we saw it in person. I do not know enough about the science to theorize why this rainbow was so spectacular, but perhaps our position sixty miles north of the Arctic Circle or the sun's twenty-four-hours of daylight had something to do with it. 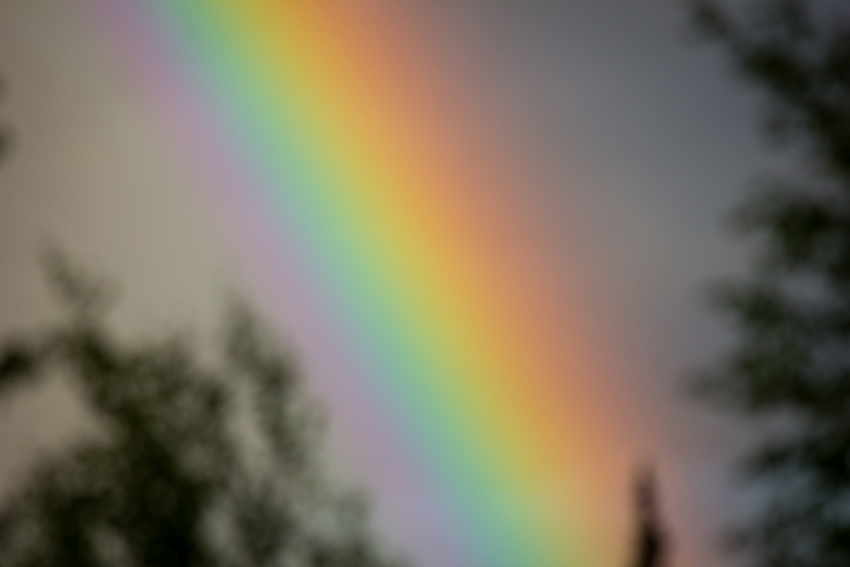 While not as exciting as our numerous animal encounters, the welcome appearance of this rainbow followed the pattern of good fortune I experienced while exploring Alaska. As to the Arctic Interagency Visitor Center, we were fortunate to have the time to spend nearly an hour-and-a-half there during our southbound journey to Fairbanks on Monday, 26 June 2017. 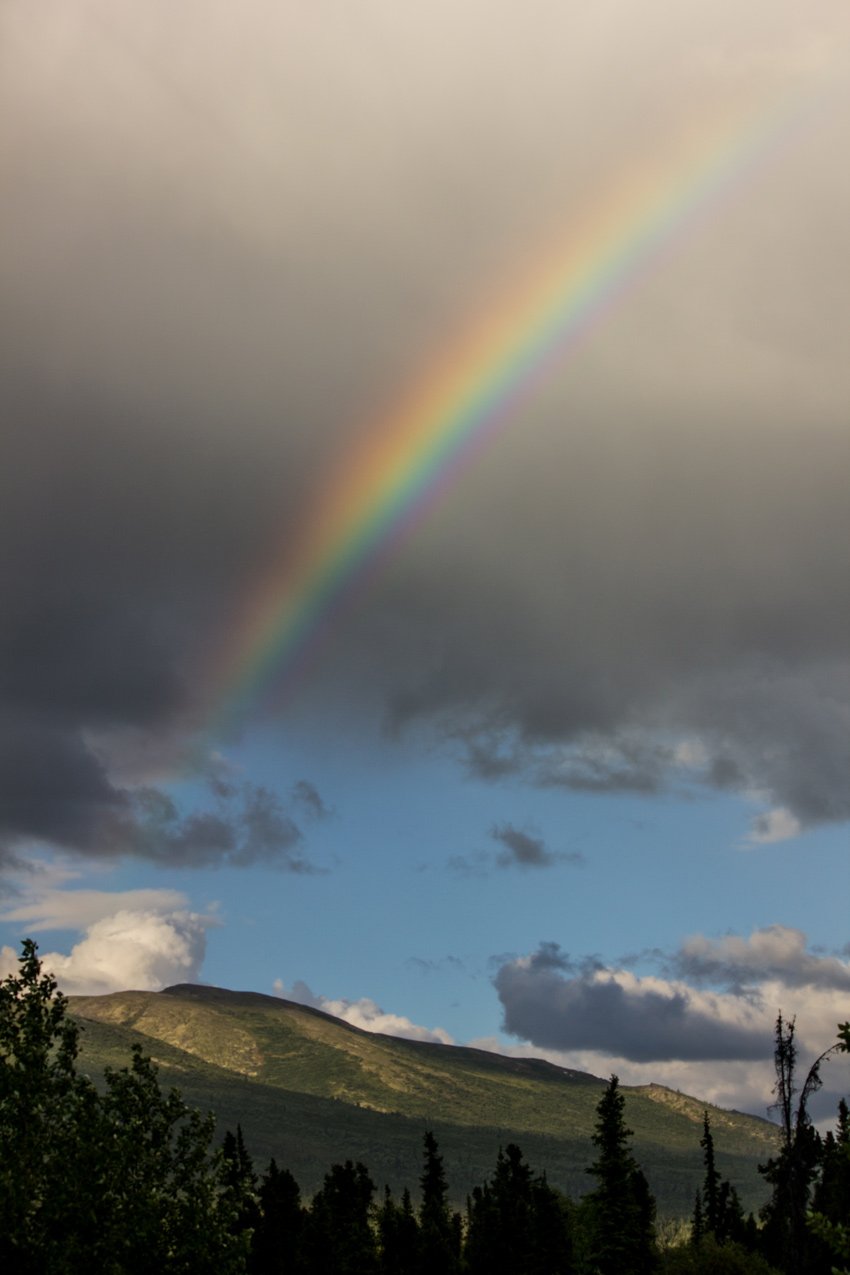 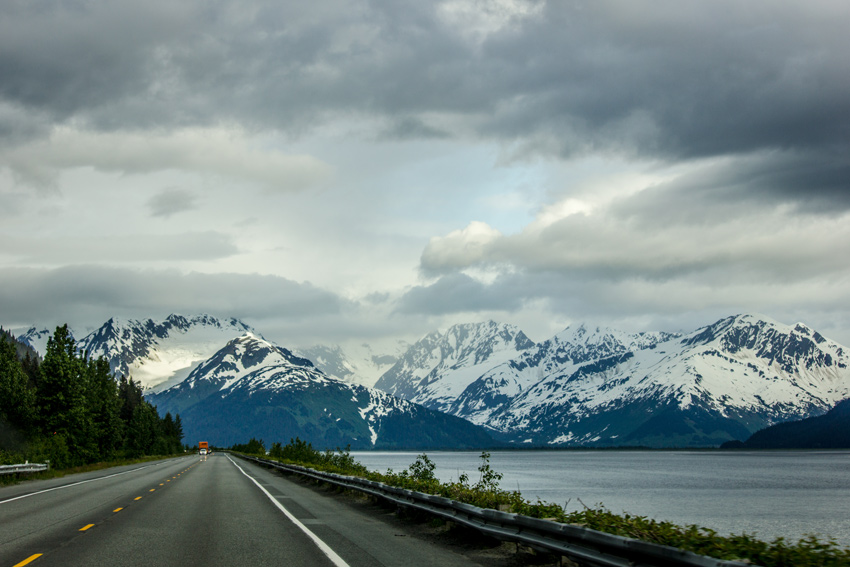 Driving south on Seward Highway (AK 1) in the Chugach National Forest toward the eastern end of Turnagain Arm beyond which lies the snow-covered peaks of Portage Valley where the Kenai and Chugach Mountains meet.

part of the Alaska 2017: Anchorage to Portage Valley album 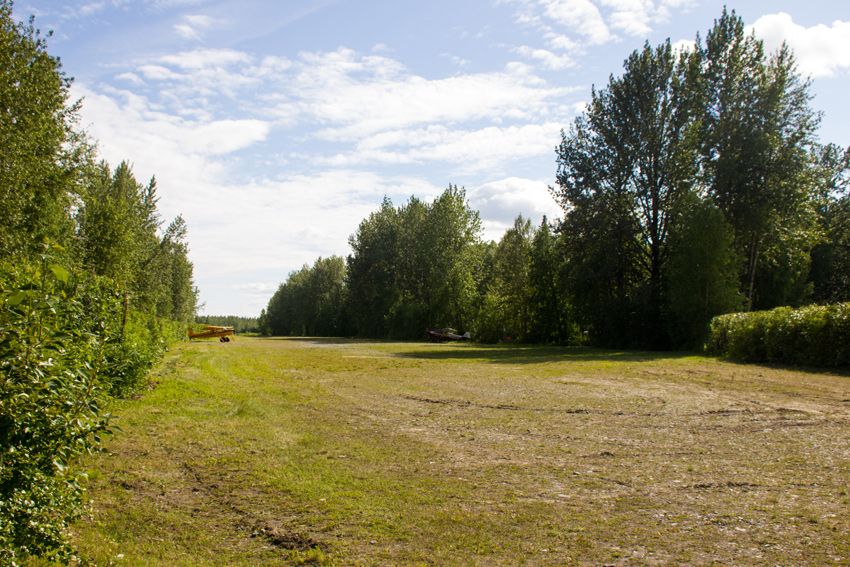 part of the Alaska 2017: Talkeetna album

One of the things that Mom wanted to see during our lunchtime stop in the small town of Talkeetna — first mentioned in "The Passing Of A Talkeetna Legend" — was the original village airstrip. Not unlike many air facilities throughout Alaska, the unattended Talkeetna Village Airstrip (AK44) on public land features an unmarked, unlit gravel and grass runway, few services and is "virtually unchanged since its construction" with "little to no modification except erosion" at the southern end.

The field, officially Runway 16/34, consists of one 1,600-foot long, thirty-foot wide rectangular field cut through the trees running north-south parallel to D Street. The northern half of the airstrip "passes between two areas of private residences where owners sometimes park their planes" while the southern half is "surrounded by wooded public lands with the Susitna River at its southernmost end." Jet fuel is available by truck only when arranged in advance and a local aviation business offers light repairs. It is possible to walk right up to the airstrip in several locations, so that is what we set out to do. 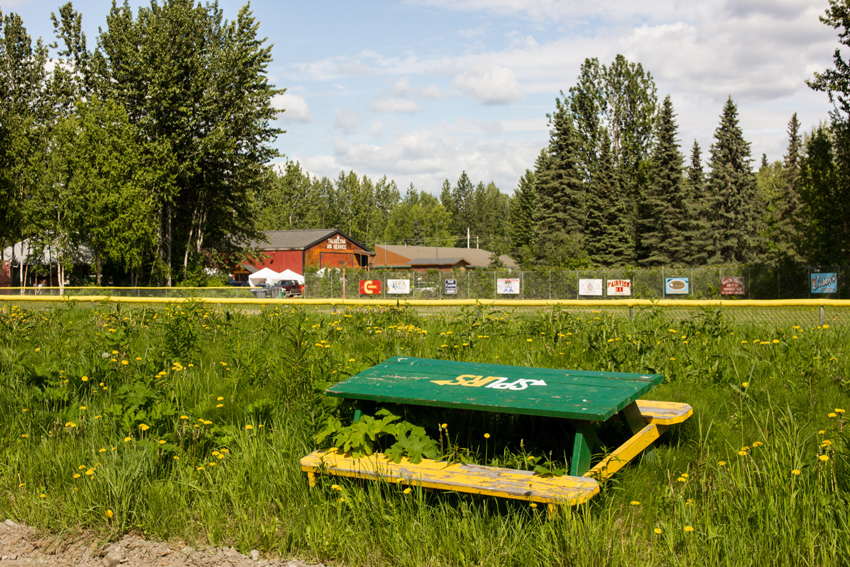 Walking south on C Street past the community ball park, we came to and turned east on Second Street. An unpaved and overgrown path connecting several residences, Second Street is one of two local roads bisected by the airstrip; the other is Third Street. At the end near where a Dodge B-Series Xplorer Camper Van (c. 1984) was parked, two signs warn people to keep themselves and their vehicles off of the active airstrip. This dead end is blocked by two wooden barricades set on both sides, an orange plastic mesh connected to each and spread across the path. Nearby, two small aircraft including Piper PA-18 N1244A (1957) were parked alongside the runway.

Wanting to get a better view of the airstrip, we doubled back our course, took the service road south of Main Street east to D Street and then headed south. The northern edge of the Talkeetna Village Airstrip is situated at the intersection of D Street and First Street, so it soon came into sight in front of us. Standing on the centerline just north of the small wooden fence delineating the property, you can see trees on an island in the Susitna River south of the airstrip. As on Second Street, there are two warning signs and a place to walk onto the field. Nearby, a small wooden pavilion has on display a propeller and an informational poster[1] from the Talkeetna Historical Society. 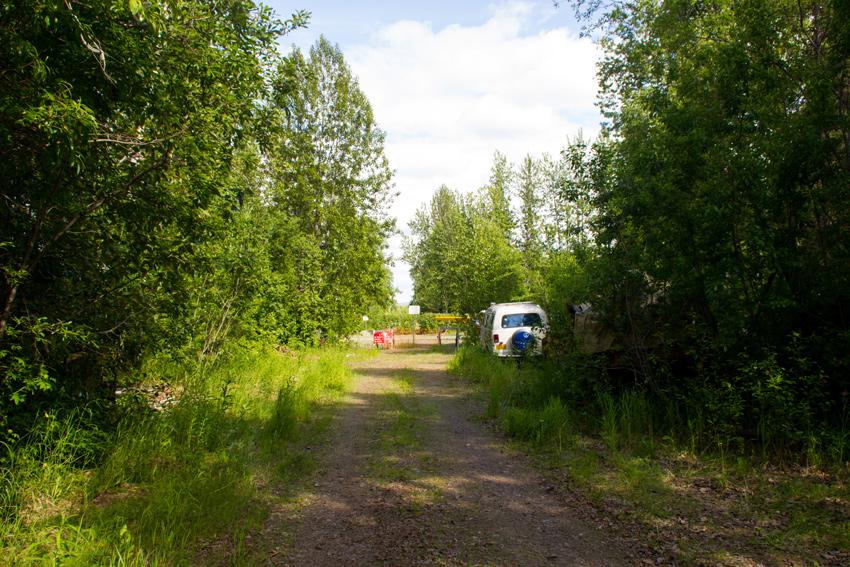 Once a remote area of Alaska, this region was difficult to access by early explorers and settlers who relied on hiking, boats, dog sled teams and horses. As gold prospectors started moving into the area in 1886, the Talkeetna settlement became a "major supply center" for miners, who at first received shipments via steamer and then by railroad following its arrival in 1920. Getting those supplies from Talkeetna to the mines was still a challenge as they had to be transported "overland on mired and rutted trails."

As early aviation arrived in Alaska, this novel form of transport was quickly adopted by settlers, explorers and miners. However, without any supporting infrastructure, initial flights ranged from risky to dangerous. Careful to avoid obstacles along the way, pilots had to land in open spaces or "on gravel bars along the rivers" as they first did in Talkeetna. Although an airstrip would be a significant safety improvement, Alaska pilots rightfully make their names being expert and daring in the face of the last frontier's unforgiving conditions. 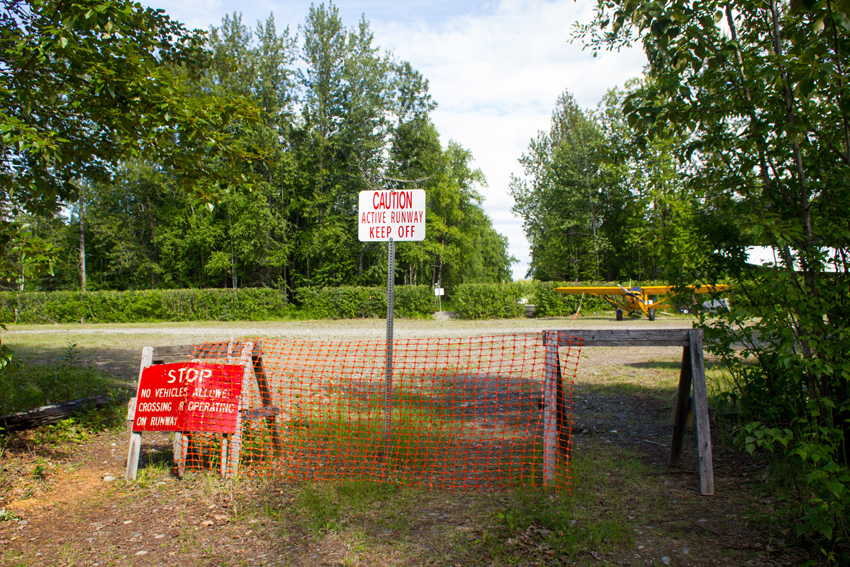 The development of Talkeetna Village Airstrip was initiated by President Franklin Delano Roosevelt's (1882–1945) Executive Order 7783 issued on Friday, 31 December 1937. The order, modifying Executive Order 1919½ of Tuesday, 21 April 1914, "[set] apart certain lands for the use of the Alaska Road Commission for aviation-field purposes" in the Talkeetna townsite. The 1939–1940 construction of the strip was conducted by the federal civil aviation agency — first the Civil Aeronautics Authority and later one of two agencies created by its split, the Civil Aeronautics Administration.

During its first decade of operation, the Talkeetna Village Airstrip "played an important role in Talkeetna's economic development and in the aviation history of south-central Alaska" by helping to open up "previously remote and inaccessible areas" to miners, hunters and later, mountain climbers. With its proximity to the railroad depot, it became convenient to bring supplies in by rail and transfer them to an aircraft for delivery to the surrounding backcountry. Soon, early "bush pilots such as Haakon Christensen, Cliff Hudson, Don Sheldon and others" started using the Talkeetna Village Airstrip as their primary base of operations.

One of these pilots, Don Sheldon, was originally part of the work crew that built the airstrip. Returning to Talkeetna in 1948 after serving and learning to fly in World War II, Sheldon started a "bush aviation business and earned a reputation as one of Alaska's best pioneer aviators." Among those passengers who hired Talkeetna bush pilots was Dr. Bradford Washburn, an employee of the National Geographic Society. Washburn began visiting Talkeetna in 1936 on a mission to photograph and map the Alaska Range. 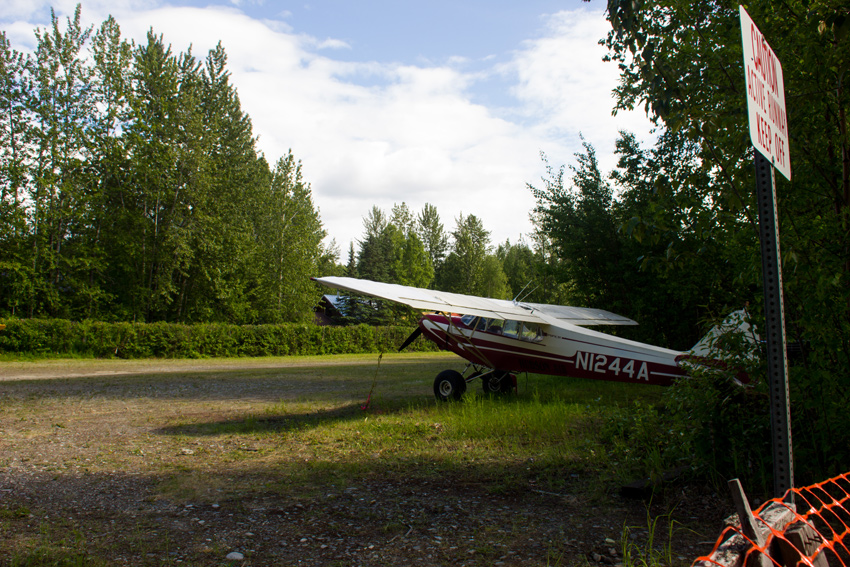 The postwar era saw an increased number of mountain climbers drawn to the area by Denali, the awesome 20,310-foot mountain unequaled in North America, as well as other elevations within the Alaska Range. Washburn used the results of his previous mapping mission to pioneer the West Buttress route up Denali, which he climbed in 1951 along with Barry Bishop, Henry Buchtel, Jim Gale, Mel Griffiths, Bill Hackett and Jerry More. Accounting for over ninety percent of attempts today, West Buttress is "considered the least technical way to get to the summit" and is the most popular Denali route with "as many as 500 to 600 climbers on it during the peak of the climbing season."

As news of the West Buttress route spread, Talkeetna soon became "the major point of departure for mountain climbers attempting to ascend" Denali, who would be flown out to the Kahiltna Glacier to begin their climb. Pilots Christensen, Hudson and Sheldon were sought out by "mountaineers from around the world [who] arrived looking for experienced pilots" to "reach the icy flanks of North America's highest peak." This successful enterprise "ferrying climbers from Talkeetna to the Alaska Range" was and is an important economic contributor, but the 1950s also saw the airstrip's decline in favor of a newer, modern neighbor. 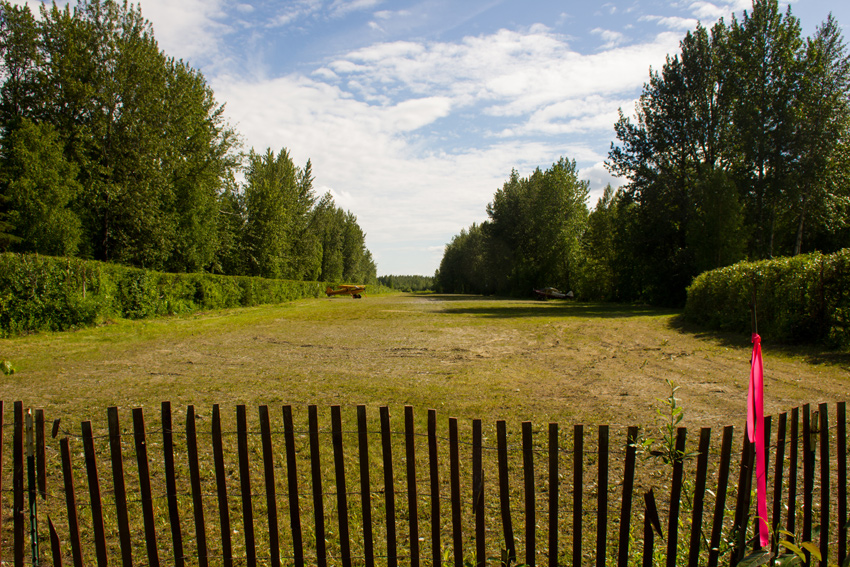 Under development from 1941 until March 1949, Talkeetna Airport (TKA/PATK) was constructed on land across the railroad tracks on the far east side of town. The airport has a 3,500-foot long, seventy-five-foot wide asphalt-paved runway designated 1/19 and features markings, lighting, ground support services and partial attendance. The opening of this facility led to the Talkeetna Village Airstrip's "period of significance" ending in 1951, although it continues to be used year-round by pilots and clients who prefer it to the busier state-run airport and by pilots flying ski-equipped aircraft during the winter. It is currently overseen by the Talkeetna Airmen's Association.

Based on the significance of its operations from 1940–1951, the Talkeetna Village Airstrip was added to the National Register of Historic Places (NRHP 02000814) on Friday, 02 August 2002. It joined the adjacent Talkeetna Historic District — which includes thirteen buildings that "reflect Talkeetna's history as a small village" — itself added to the register (NRHP 93000321) on Monday, 26 April 1993. 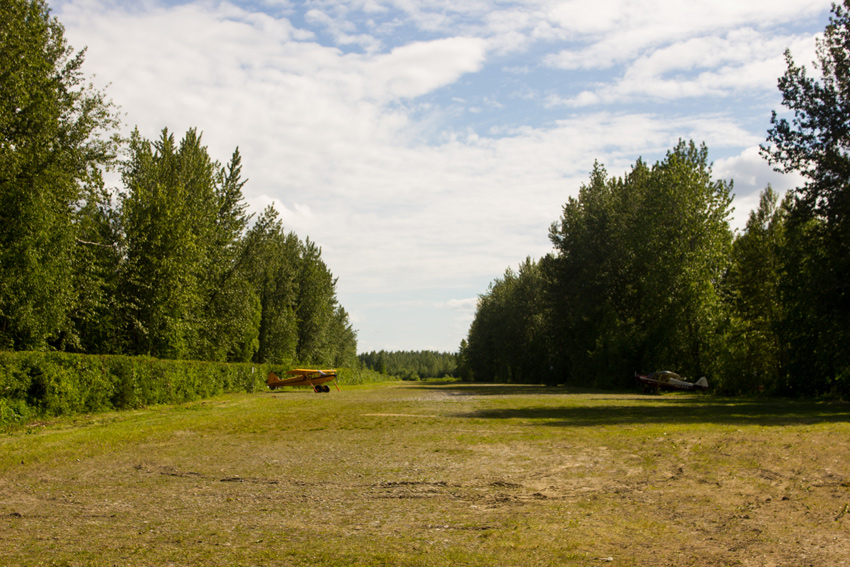