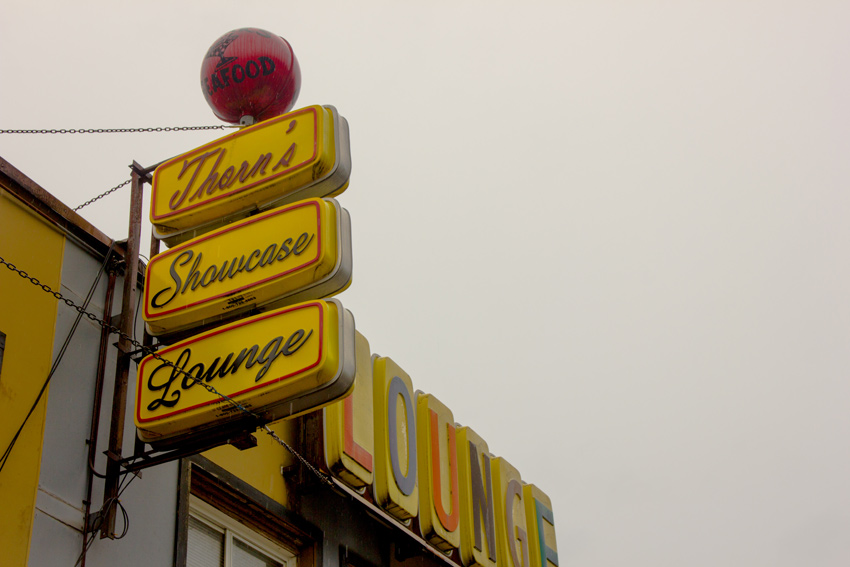 Lighted signage on the facade of the Thorn's Showcase Lounge building.

One of the best parts of travelling is discovering and trying local bars and restaurants. Whether researched in advance or not, I generally have very good luck with my selections and often wish to return to them. Alaska was no different in this regard and although I enjoyed every place we visited, several of them stood out as immediate favorites. Among those is a restaurant and lounge that has been in Seward for many decades.

With its red padded seating, string lighting and erstwhile decor, walking into Thorn's Showcase Lounge is almost like a trip back in time. A short distance from Resurrection Bay on Fourth Avenue, Thorn's Showcase Lounge is probably best known for serving "bucket of butt" halibut meals, pouring stiff cocktails and displaying a large collection of vintage Jim Beam whiskey decanters. Some people say that the interior brings to mind the look and feel of Las Vegas in the 1960s; I saw a dimly lit retro joint delightfully filled with character, coolness and a bit of kitsch. 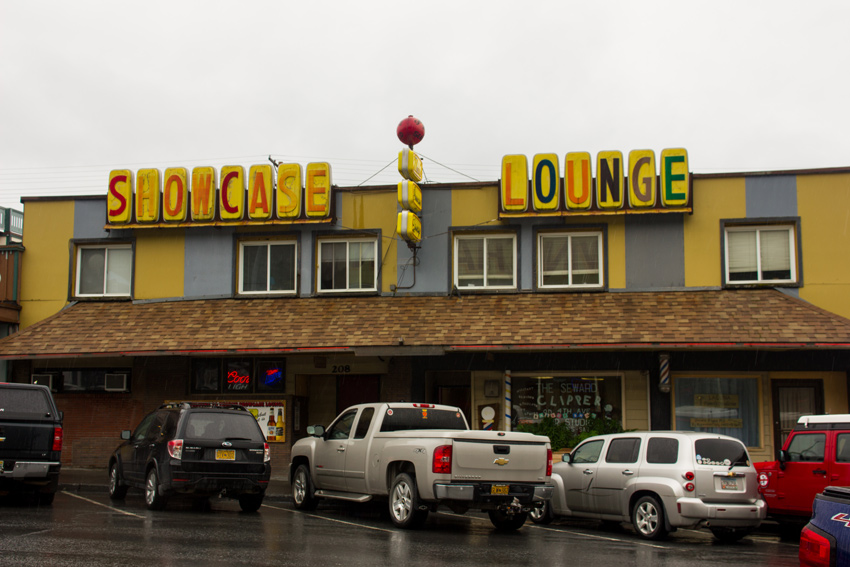 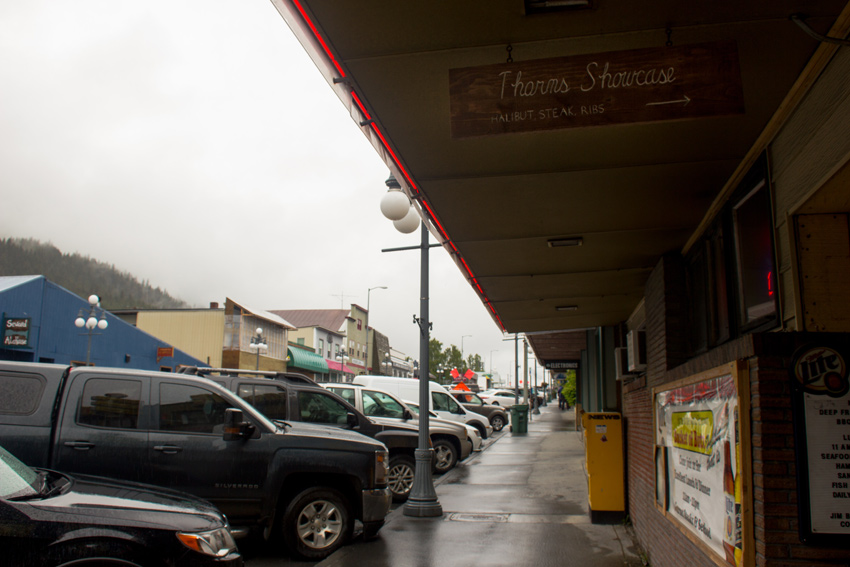 The origin of Thorn's Showcase Lounge is tied to another place, Gil's Lounge, which was established in 1946 or 1947 in the Palace Café Building by Harley "Hal" Otto Gilfilen (1903–1989) and his wife Clara or Clair. A few years later in 1950, Gil's Lounge relocated to 208 Fourth Avenue. The Gilfilens operated Gil's Lounge until 1961, at which time they sold the business to Dorothy Johnson. 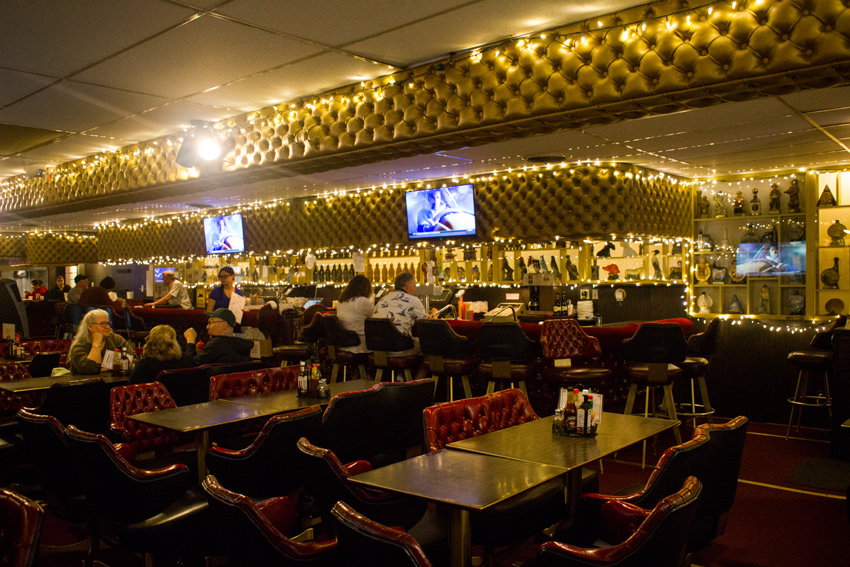 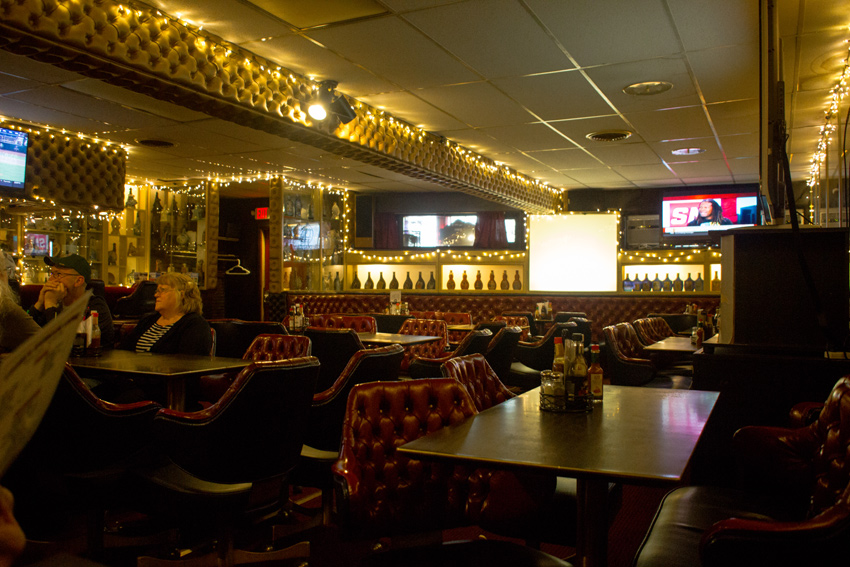 Although signage on the southern exterior wall says that Thorn's was established in 1962, my research suggests that Gene and Pat purchased Gil's Lounge from Dorothy Johnson in 1967. Several fires and earthquakes had dealt devastating blows to Seward, but it was a fire in January 1971 that destroyed the Thorns' business. By Wednesday, 20 October 1971, they had rebuilt and renamed the bar, acquiring Alaska Alcoholic Beverage Control Board license number 1130 in their name. Together, the Thorns owned and operated their business for fifty years while also raising a family including children Craig, Steven E. and Karyn.

The alcohol license holder today is Thorn's Showcase Lounge LLC, formed and assigned entity number 61327D on Thursday, 26 June 1997. The initial documents have Pat and Gene's son Steven E. Thorn and his wife Shannon M. Thorn listed as the corporation's owners, but this was changed to Gene and Pat in a filing issued on Monday, 25 November 2002. Sadly, the corporation was again updated in a filing issued on Thursday, 14 December 2017 to remove Pat's name following her death on Wednesday, 20 September 2017. By his own account in April 2017, Gene had been housebound for the previous six months following a stroke that impacted his use of one arm. 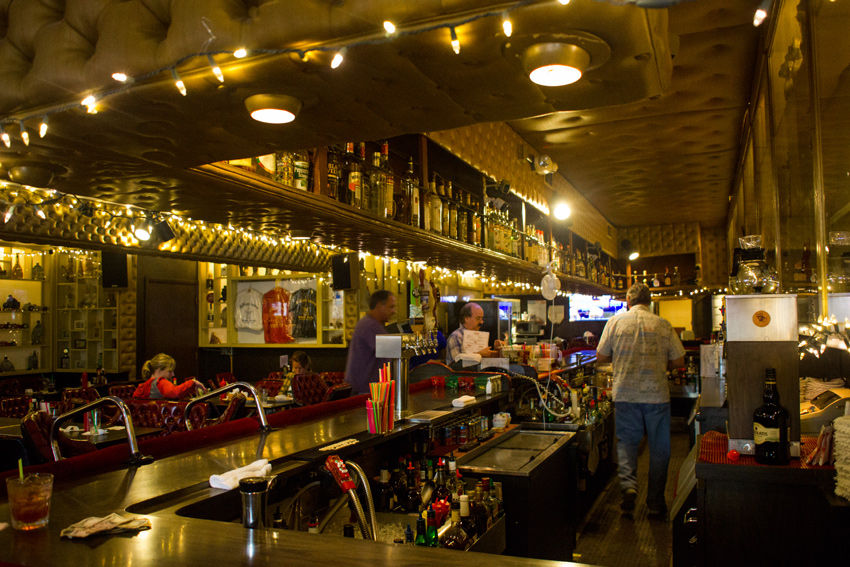 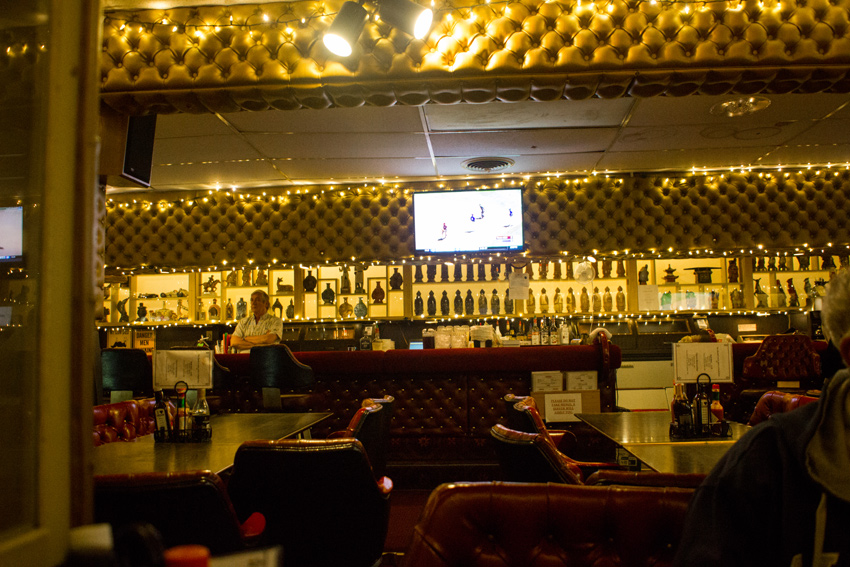 With its relatively small interior and low ceiling, I can only imagine how smokey this place must have been during the heyday of cigarette smoking. Indeed, there was apparently an ashtray next to the toilet on Thursday, 21 May 2009. As part of a growing trend for Alaska businesses, Thorn's Showcase Lounge went smoke-free on Tuesday, 01 April 2014. By Friday, 23 January 2015, Thorn's had also signed a resolution of support for statewide smoke-free indoor workplaces legislation.

Thorn's Showcase Lounge has a number of neighbors in the building that have changed over the years. During my visits on Tuesday, 20 June 2017, the two other storefronts were occupied by The Seward Clipper barber shop and Lacuna Family Medicine. Other business tenants known to occupy space next to Thorn's at one time or another include Luxe Hair; Deb's Hair Salon; Seward Acupuncture and Massage Therapy; Seward Chiropractic Clinic; and Victorian Serenity by the Sea. In addition, several apartments are rented on the second floor above the street-level businesses. 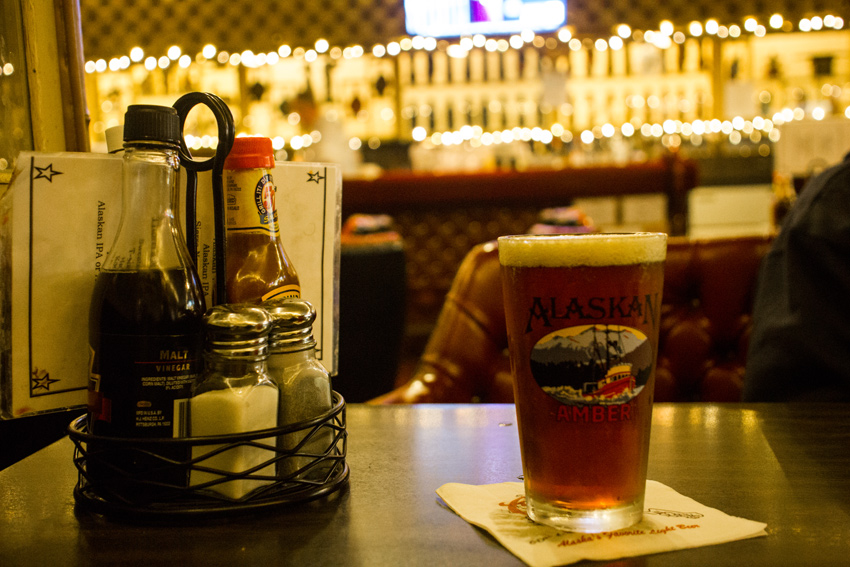 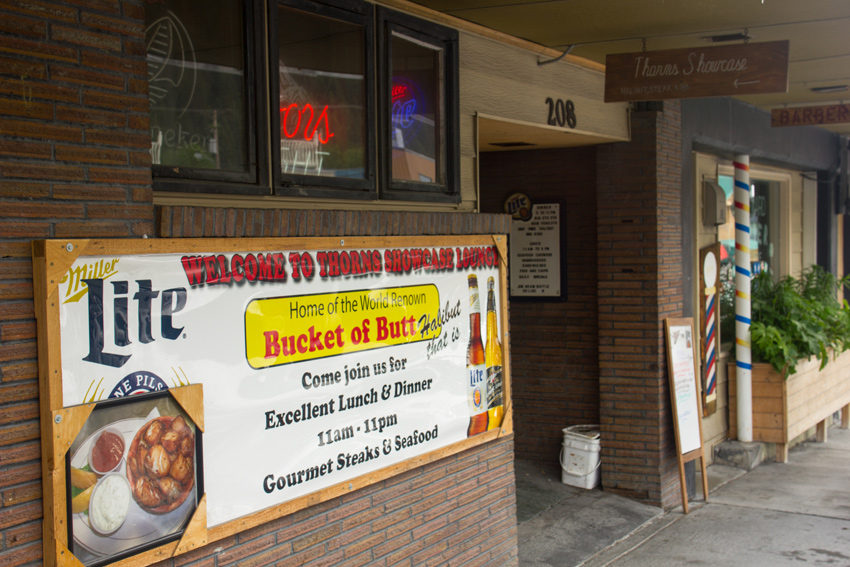 Having learned about Thorn's Showcase Lounge from Mom and Ross, who stopped in for a meal several weeks prior to my arrival in Alaska, I knew that I wanted to see it for myself. It was cold and raining as we drove into Seward, so we decided to go ahead and have lunch first. Stepping through the small vestibule to the inside of the restaurant, I immediately decided that I liked the joint regardless of however my succeeding experiences might turn out. As it was only lunchtime, I had with my meal a pint of my favorite local beer: Alaskan Amber. Everything we ordered was fresh and delicious.

About seven hours later and after considering dinner at a few places like Ray's Waterfront at the marina, we walked back inside Thorn's and returned to our table from lunch, the easternmost half-booth along the northern wall. As before, everything we had was great but of particular note are the tater tots — perfectly cooked to be crispy on the outside yet fluffy on the inside — and the generously apportioned cocktails made at the bar and delivered by the waitress. I enjoyed a few Stolichnaya Razberi and Diet Cokes, my default cocktail, and remarked several times about their potency. 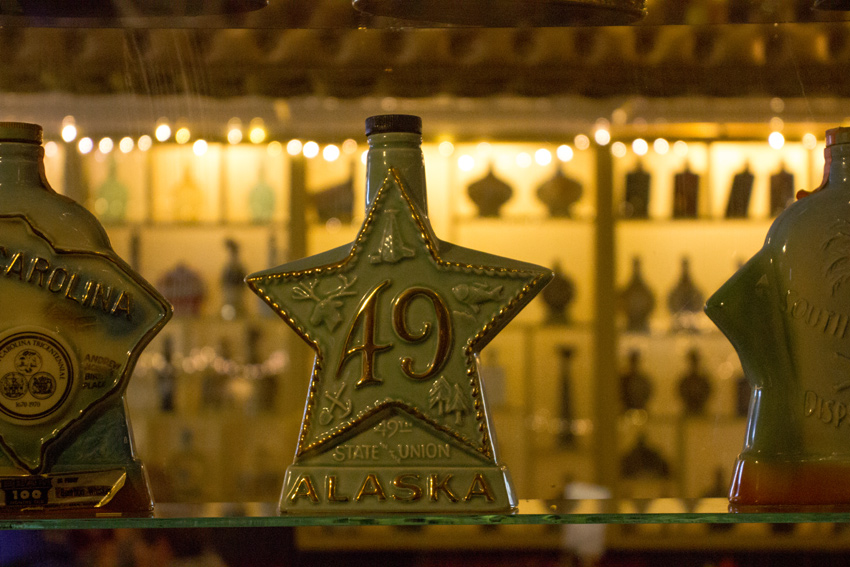 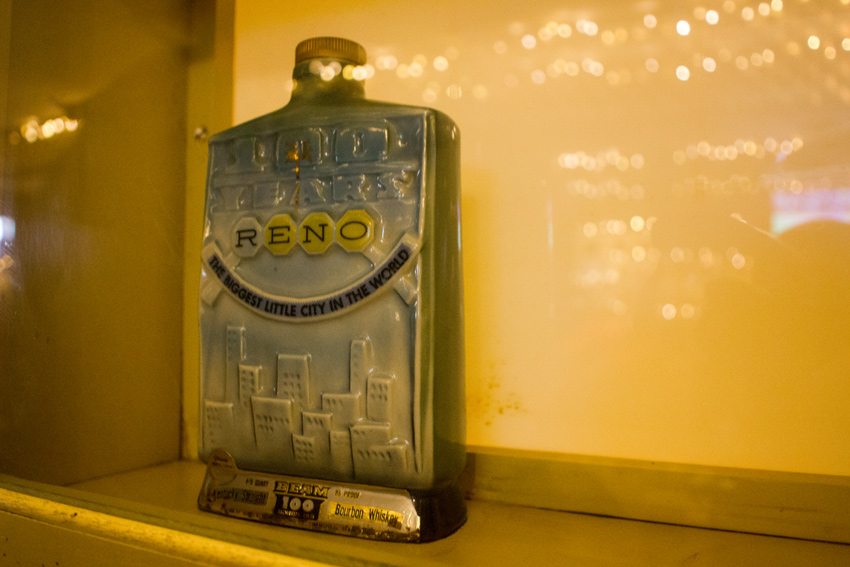 Speaking of liquor, the hundreds of Jim Beam whiskey decanters adorning the wall-to-wall showcases represent only part of a larger collection by Gene Thorn. During his visit, Ryan Reynolds learned that "Thorn has two full bottles in his basement for every one that is displayed" and that his "massive collection encompasses several decades worth" of the specialty bottles.

Jim Beam released a "wood top bowling pin" as its first specialty bottle in 1952. Starting in 1955, Regal China Company was commissioned to design specialty bottles and decanters, "originally created to help drive sales and offer bourbon fans more eye-catching packaging suitable for gifting." With many carrying the "C. Miller" mark, Regal China produced Jim Beam items "for more than forty years" including custom bottles for collector clubs. All specialty bottle production was discontinued in the "early 1990s" but resumed in 2012. 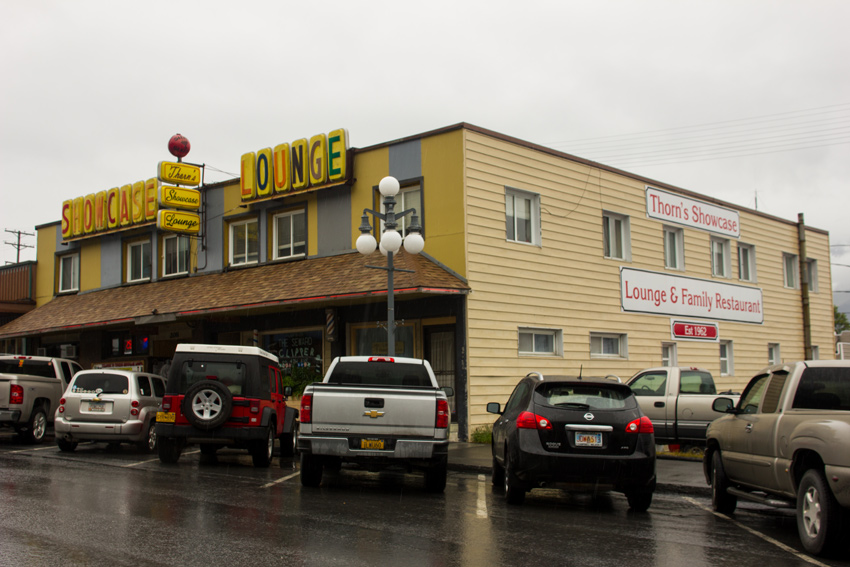 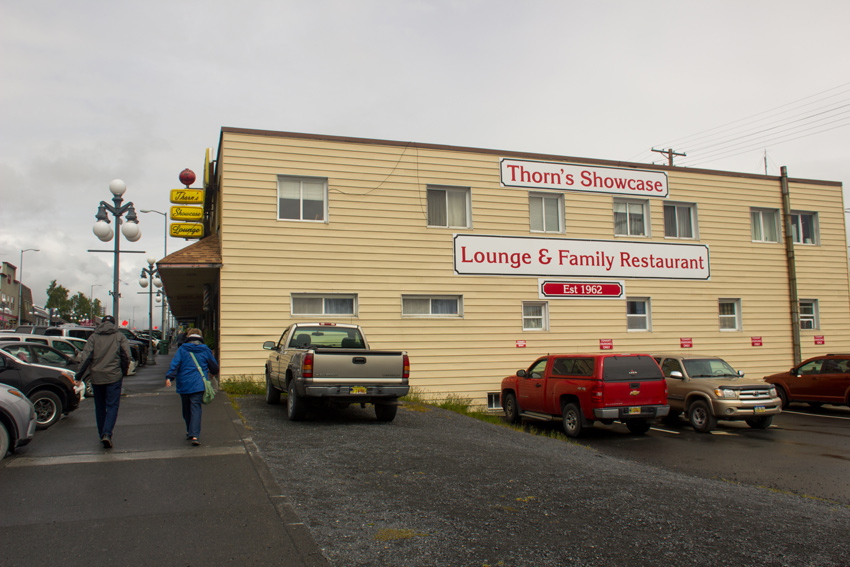 I do not know when I will next travel to Alaska, but Thorn's Showcase Lounge is the kind of place for which I would make a special trip to visit again. With its low-key casual nature, fantastic meals and killer cocktails, there is something for everyone at Thorn's. If they keep it up, they should be able to carry on for another fifty-plus years and I hope that they do.

2021-08-13 Update
I learned via email correspondence on Wednesday, 28 July 2021 that Louis Eugene Thorn had passed away on Saturday, 29 August 2020. His obituary, as published in the Anchorage Daily News on Wednesday, 02 September 2020, is presented below.

The sea was angry that day my friend…

Louis E. "Gene" Thorn was born on May 15, 1931, in the small Minnesota town of Staples. Eighty-nine years later, in the comfort of his own home, Gene passed away on Aug. 29, 2020, in Seward, Alaska, surrounded by his five children.

Dad was raised on a dairy farm during the Depression, and these two things shaped his work ethic and attitude toward life. He was a Class Vice President and played football and baseball at Staples High School, graduating in 1949.

He married Ardith Nelson in 1949, and they had two daughters: LuJean and Jackie. In search of opportunity, he drove the Alcan Highway with his uncle Walt in 1952. He settled in Seward, becoming a fisherman, longshoreman and small-business owner. In 1960, he married Patricia Clancy and together they had three children: Craig, Steven and Karyn. As a business owner, at one point he simultaneously owned Solly's, The Palace and Gilfillen's bar. After a devastating fire in 1970, he rebuilt what would become the iconic Thorn's Showcase Lounge.

In the 1970s, he organized the construction of the Seward Little League baseball field. He was known as a very generous man and for many years supported athletics at Seward High School. He built what would become known as Thorn's (basketball) court, which he described as the best investment he ever made, as it was utilized extensively by Seward youth for decades. He loved attending his children's and grandchildren's sporting events and never missed a basketball game. He loved watching college basketball and his favorite team was the Duke Blue Devils. He was an avid Chicago Cubs fan and in 1985 went on a Hawaii Cubs cruise with his son, Steve. He was gregarious and always quick with a joke and had a nickname for everyone.

He is survived by his children: LuJean (Steve) Larson, Jackie (Chuck) Anderson, Craig (Debbie) Thorn, Steve (Shannon) Thorn and Karyn (Leif) Clemens. He has 13 grandchildren and 16 great-grandchildren. He was predeceased by Pat, his wife of 57 years.

"The Sweet Sound That Calls The Young Sailors" https://mtsutro.org?p=1247