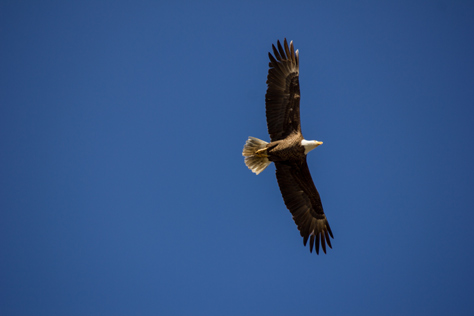 A Bald Eagle (Haliaeetus leucocephalus) chases and tries to steal a fish from a light morph Short-tailed Hawk (Buteo brachyurus) in the skies above Paynes Prairie Preserve State Park.

Three years, seven months and twenty days after I decided to migrate my then self-hosted photograph gallery to Flickr, I made the seemingly inevitable decision to reverse things and bring my photos back home.

The Gallery contains 1904 photographs in 107 albums as of 08 February 2015. Thirty-seven previously published albums are still queued for migration. The Gallery itself was migrated to Zenphoto in November 2014.

As I wrote in November 2009, I did not take causally the decision to move to Flickr. I have always been a proponent of do it yourself on the internet, in part because that was the only option when I put my first website online in the mid-1990s. As such, my site featured a photograph gallery of some sort since November 2002.

I was fully aware of the sacrifice that I was making, but did so for the reason that so many end up doing one thing or another—money. Disk space and data transfer costs were higher back then and my shared web hosting account simply did not have enough resources. In addition, the software at the time required too much upkeep and was susceptible to defacement.

Separately, I was using Google Reader's sharing feature as a way to share articles from around the web on my website quickly and easily. This worked fantastically until October 2011 when Google started rolling out Google+ features and made efforts to "clean things up" which is nothing more than a clever euphemism for "remove features or options."

I stopped using Google Reader completely at that moment. I hate to say it to all the Reader fans that have been bemoaning its demise for months, but you should have seen it coming effective 20 October 2011. As an aside, I am too astutely aware of the likeliness that Google Voice—one service I do rely upon—will meet the same fate as Reader. It is all just a matter of time.

In the same article as my quitting Google Reader announcement, I also talked about Flickr and the concerns that I had about the service under Yahoo. Somewhat ironically, those concerns were abated when interest in Flickr was renewed and started down a path that would lead me to leave.

My initial reaction to the complete refresh of the Flickr website design on 20 May 2013 was not positive.

I should have seen this coming: the new Flickr has me speechless (in a bad way). I guess I should start a migration plan back to my website.

I did not start any migration planning, though, realizing that resisting change is human nature and that I should reserve my judgment for a time after using the new site more. As I did, it seemed like the redesign was as much a social media effort as an overdue update. I knew things were doomed the moment I tried to find my "Collections" and could not.

The purpose of my gallery is to provide grouped and categorized photograph albums just like you would with prints. It exists for family, friends and me; a wider audience is just a bonus. In fact, a random individual favorited a photo while I wrote this article.

While providing a far richer experience perhaps for viewing photographs, the new Flickr sacrifices the navigability of the "Collections" and "Sets" organizational structure.

I always treated the "Collections" pane on my main Flickr page as the starting point to browsing my images, mirroring how I had done things in the past. Now, you have to look for and select "Collections" on a menu activated by a button labeled only with three dots.

Buried as such, they may as well have removed the feature completely. Yes, there is a named "Sets" button that takes you to a proper page displaying them, but the overall hierarchy is completely transparent and lost now.

A full-width mosaic for browsing images is also very nice, but there is no option to turn it off. At least when this feature was initially rolled out (as "justify"), it supplemented the other viewing options. My cellular internet connection generally meets my needs, but the mosaic view takes too long and wastes my expensive data transfer allotment. Add to this infinite scrolling and the site runs like garbage for me.

I understand that there was a small firestorm of users who went on tirades and posted immature commentary to Yahoo CEO Marissa Mayer's photo page. There is no need for that. I applaud Flickr on the effort to improve their service and bring focus to the reason for the site, photography.

I had only been lightly weighing my options for a possible migration when I saw Yahoo's latest contribution to Flickr on 01 July 2013. Across the top of every page appeared a new Yahoo! menu bar with links to their services—Flickr included.

Not only useless to me, ugly and a needless waste of vertical space, this bar is really a form of advertising for which my paid account is explicitly not to have. The discussion online has focused a lot on using browser tools like Adblock Plus and Stylish to remove the bar. That may work fine for me, but what about everyone else browsing my photographs?

I have not seen an advert on the internet in over a decade because of blocking implemented on my end. Yet, I paid money for a Flickr Pro account so that my visitors would not have to suffer with advertising. Advertising which may have also appeared to be endorsed or promoted by me.

Concluding that this was the motivation needed to consider alternatives seriously, I made the decision to find suitable software to self-host and begin the arduous process of migrating.

The Long Road Ahead

The process will not be an easy one, since I only a year ago started my current Adobe Lightroom workflow. For everything else, thousands of photographs, the metadata only resides on Flickr. Years ago realizing that conundrum, I purchased a copy of Bulkr Pro to download photos with the metadata properly embedded in EXIF for backup purposes.

My migration procedure now begins with Bulkr. I am trying to automate where I feasibly can, but the process as of now is a bit tedious. It is an opportunity to get everything in Lightroom the right way though, so I must take it.

Between my job and volunteerism, my free time is already quite limited. This project will certainly not help with that, so I have made peace with the fact that this could take a while.

I had been planning to overhaul this site, write a new code base and make it wider. There are also hundreds of photographs that need to be weeded through and processed. But all of that will have to wait now. I will also need to go through this site and update all Flickr links to their new counterparts. Boy, I wish I could just run URL redirection on Flickr!

For those who are using embedded images, I am thinking of notifying where I can once that image has been migrated. This may not always be feasible, but I would like to try to give a heads up to those webmasters. Eventually they will know, as I plan to take photographs down from Flickr as they are migrated. This seems the simplest way for me to keep track in an orderly fashion, one set/album at a time.

NOTE: I migrated to Zenphoto in November 2014 after Gallery 3 ended development and unceremoniously sunset. You can read more about that process and how I came to select Zenphoto in "The Marriage of Heaven and Earth".

I selected Gallery3 as the software to host the resurrected Mount Sutro Gallery. I was not previously familiar with the Kohana PHP framework Gallery3 uses, but was quickly impressed by its versatility.

The module and theme systems also seemed like the best fit for me since they allow for limitless customization without touching the core files. To make a change, you copy the relevant core file to a themes folder and make your code updates there. Perfect!

While writing this article, I looked at archive.org and discovered that I was using the first version of Gallery back in 2002. From what I understand, the similarities basically end at the name since the code base has been rewritten for each subsequent major version. I do not remember why, but I switched to Coppermine before migrating to Flickr… and have now come full circle.

Nice! Did you make your own (better) version of Flickr???

Support for custom short URLs was the only must-have feature that I could not figure out how to write on my own, a feature for which a module did not already exist. Fortunately, I managed to find a lone reference from someone who had faced the same situation.

I tracked down the author's website and was delighted to confirm that the feature was indeed present. I emailed the individual, one Martin Sebald of Germany, explained my situation and asked if he might share his solution.

A very kind and gracious person, Martin not only immediately provided the code—which amazed me in its simplistic approach to solving the problem—but offered to assist me in implementing it, if needed. I was able to customize it without issue and get it working within minutes, but I did enjoy a few more emails back and forth with my new overseas friend talking about travel and license plates.

On the hardware side, I am in very good shape. The dedicated server that I moved to last month is fast and performing well. Since I manage every aspect of the server, I have been able to make customizations and improvements that were never possible with shared hosting.

I keep eyeing the disk space gauge and thinking that as I continue the migration of some 8,000 photographs, I will have to add additional disk space and an equal amount on the backup server, too.

Even if I have to put a PayPal button up and hope that some kind souls drop a few bucks in, the cost of this enterprise is well worth it for the pure and simple fact that it is all mine.

I will never again come home from work and be surprised to find a feature drastically "improved" or removed altogether. If I do not like something, I can change it. It will be exactly what I want it to be.