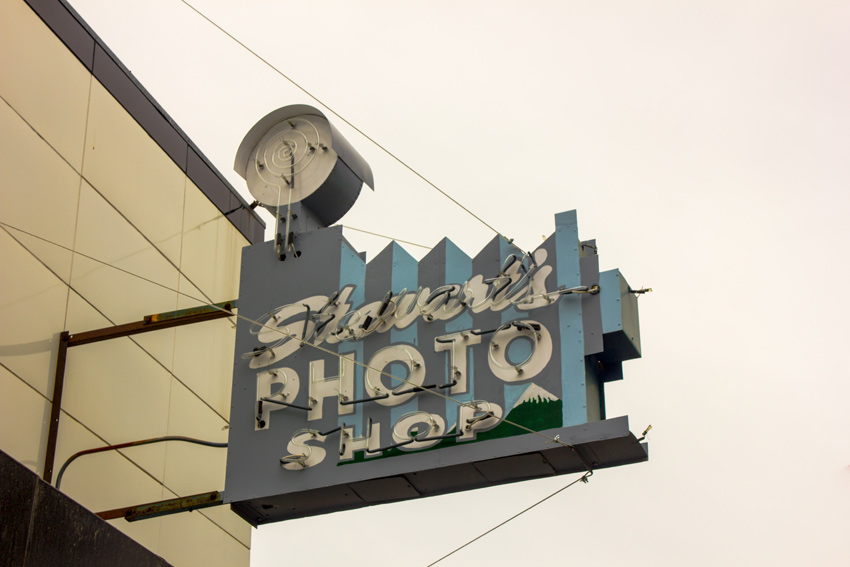 part of the Alaska 2017: Anchorage album

It was around the time I was having lunch in Talkeetna that I realized I was in trouble. At the extraordinary rate that I was taking photographs in Alaska, I would fill both of my sixty-four gigabyte memory cards long before the end of the trip. Our next stop was Anchorage and since I was aware of a photo shop there, we made plans to stop by the following day while exploring downtown.

First established in 1942 by Herbert Ivan Stewart (1911–1986) and Oro Rozella Stewart (1917–2002), Stewart's Photo Shop has been located in the Ship Creek Meat Market building since the early 1960s. Ship Creek Meat Market was founded in 1915 by one of the first people to arrive at the settlement, Oscar F. Anderson (1883–1974). The original structure was replaced in 1936, continued to operate as the butcher shop into the 1950s and then was taken over by the Stewarts.

Approaching the storefront of Stewart's Photo Shop, I was taken by the curved glass blocks on the left side of the doorway. Not only am I a fan of glass blocks but the entranceway bears a resemblance to my go-to camera shop in Orlando, Florida, Colonial Photo and Hobby, which features similar curved glass blocks on both sides of their doorway. To further the coincidence, Colonial's building was originally built as a Publix Super Market in 1948. 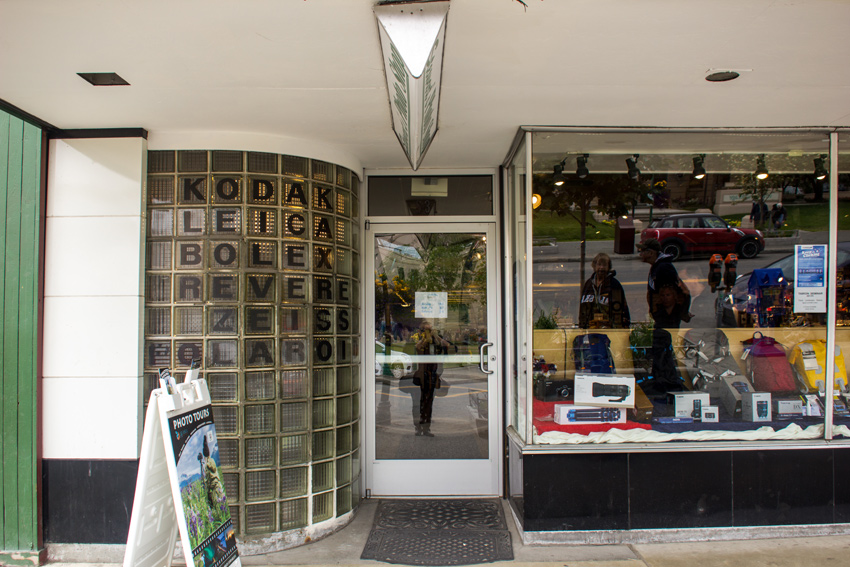 Upon seeing the interior of Stewart's Photo Shop with its wood floors and tin ceiling, I was again reminded of another location. Those two features were discovered during renovations from 2011 to 2013 at the former Schwartz Market in Pittsburgh, Pennsylvania — further documented in my 2015 Wonder Boys film location guide, "The Far Shore of Accomplishment".

I was relieved to discover that there were several sixty-four gigabyte memory cards, the same brand and type as my cards but faster, available for purchase at a surprisingly low price. We browsed for a few minutes and then chatted with the friendly clerk about the business and building while I paid for three memory cards, two for me and one for Mom as a gift. Having completely underestimated my memory card consumption rate, Stewart's Photo Shop was a total life saver in a time of great need. 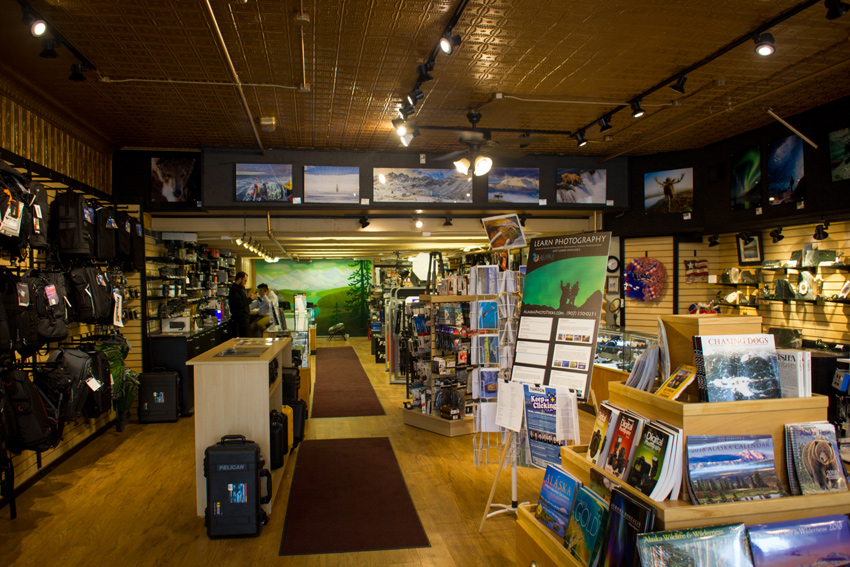 Continuing our explorations downtown, I was pleased with the number of classic neon signs still hanging intact above storefronts. My preference would have been to take neon sign pictures in the dark, but as I wrote in "The Land Of The Midnight Sun", there were no dark nights during my three weeks in Alaska.

West one block and across the street from Stewart's Photo Shop is the art deco Lathrop Building built from 1941 to 1947 — including a wartime pause — as home to the Fourth Avenue Theatre, operated as a first-run movie house until the mid 1980s. The building included a radio and television broadcast facility, restaurant and an apartment, with numerous murals decorating the theatre's interior. Following the theatre's closure, the city renovated the building and for a time a local caterer hosted banquets there. The future of the building is undetermined, but recent news raises hope that it will be preserved. 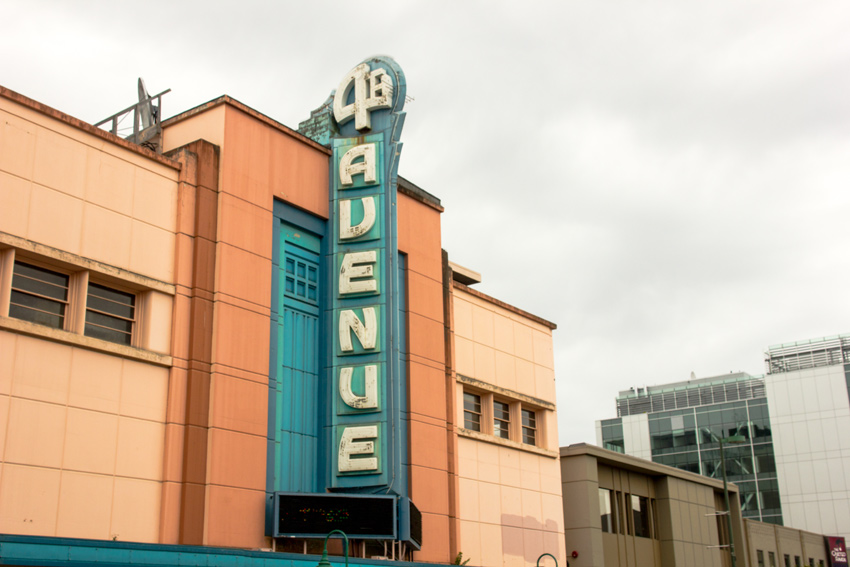 Several blocks to the east is the Wendler Building and its Club 25 neon sign. Built in 1915 by Anton J. Wendler (1868–1935) and Florence Juanita Lucas Wendler (1883–1965) along with Raymond C. Larson (1885–1941), the Victorian-style building opened as the first grocery store in Anchorage, Larson and Wendler Grocery.

When the store closed in 1920, Florence converted it into an apartment building (the second floor already had living quarters). Later in 1948, "she and her daughters started Club 25 … a women-only private club with a refined atmosphere." Men were allowed soon thereafter and Club 25 operated as "one of Anchorage's finest restaurants and a center of the city's social scene" until 1982. The building was donated to the city the following year with a provision that it be relocated. It was moved to where it stands today, currently used as headquarters for the Anchorage Fur Rendezvous. 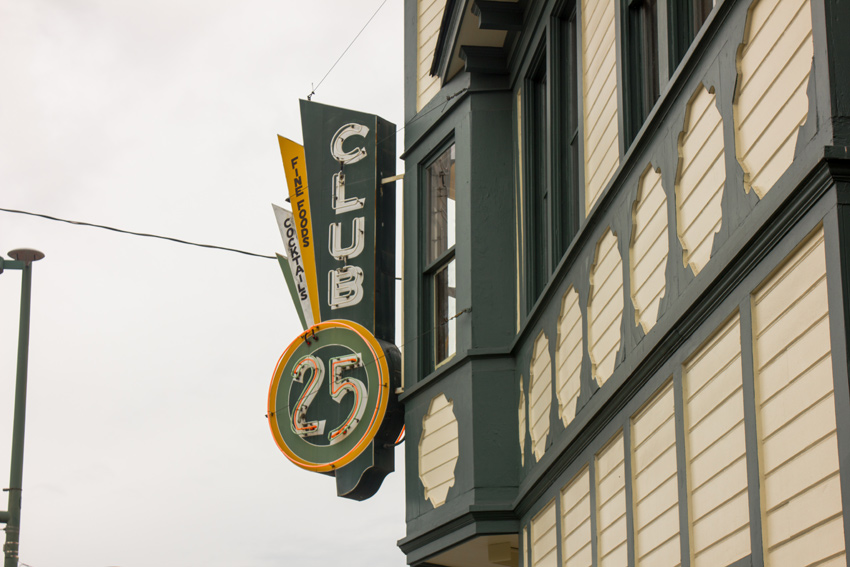 On the next block east is the neon sign and thermometer at Big Ray's 4th Avenue Army Navy Surplus. Opened in 1947 by Glenn Miller, John McManamin and Howard Cruver, the store specialized in military surplus and cold weather gear in a post-war era. The store was successful, leading to a Fairbanks location. More recently between 2007 and 2010, second locations were opened in both cities and an existing sport shop in Kodiak was acquired.

Although the original store in Anchorage was on Fourth Avenue, the building where I found it was constructed in 1957. I found no details about this, but this fact suggests that the original store moved down the street one decade into business. The thermometer on the neon sign was manufactured by Taylor Instruments, originally founded in Rochester, New York in 1851. Its reading of sixty-nine was four degrees higher than the day's high temperature at the airport weather station less than five miles to the southwest. 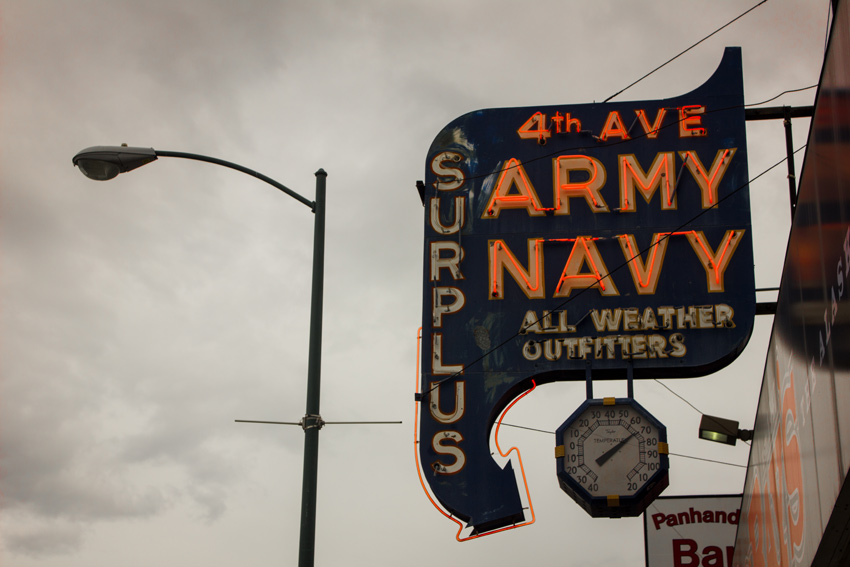